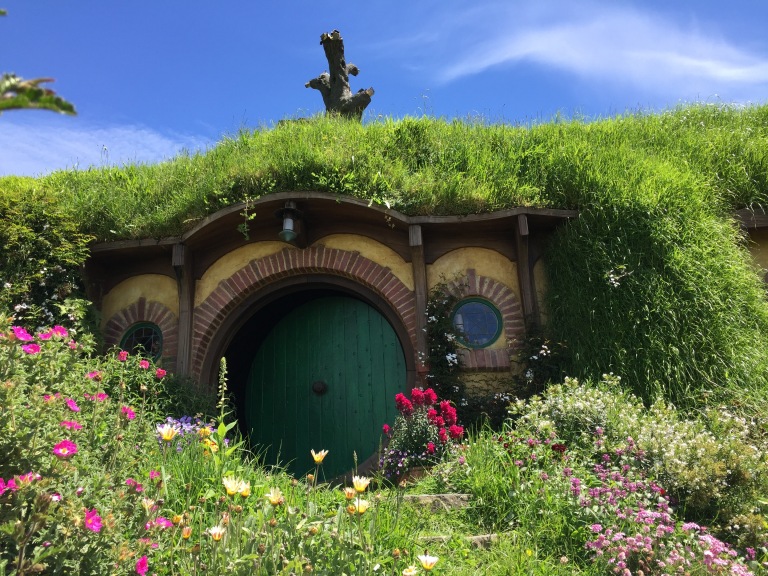 Today I would like to take the time to tell you about my time at The Shire. The Shire is really a lovely place. So green, peaceful. I can see why the Hobbits decided to make it their home. Hobbiton as they call it is built on a family’s farm. The family owns about 13,000 sheep and some cattle. I don’t remember the exact amount. So on your drive out to The Shire, all you see is rolling hills full of sheep. Sometimes the sheep are in the middle of the road and the bus driver has to honk their horn so they will move. While filming, Peter Jackson had a studio on the farm, but no one else stayed on site. Everyone was to be bused in every day. They had local tryouts to be a hobbit. The requirements were 5’2 and have a round face. I could have been a hobbit! The first things you see are a few stage hobbit holes and a real garden. The hobbit doors are two different sizes and this was used to make Gandalf appear much taller (putting him next to a smaller door) and the hobbits much smaller (placing them next to a larger door). A lot of that type of technique was used to make the hobbits appear much smaller. It was unbelievable how much detail went into the set. The moss on the fence was a mixture of fake glue on moss and yogurt. They were hoping the cultures in the yogurt would create real moss. There was a clothesline, and they had someone walk up from a hobbit hole to the clothes lines every day for 10 days to build a path. So when they filmed it looked liked it was a well-used path. When preparing for the filming of The Hobbit, they thought they would need more hobbit holes. So Peter Jackson and company spent $2 million dollars on 4 new hobbit holes just in case they might need them. Those holes were only briefly shot in one scene. And that is the one when Bilbo returns from his journey and sees from afar his stuff being sold off. The layout of The Shire is very hilly and not exactly ideal for a lawn mower. Since the farmer who owns the land has 13,000 sheep, they decided to let the sheep graze the hill to keep the grass short. One day a gardener heard a noise coming from inside one of the hobbit holes. Turns out it was a sheep! It somehow got the door open and then locked itself inside for 3 days. When the gardener tried to free it, the sheep went a little crazy and caused quite a bit of damage to the home. Now they are not allowed to let sheep graze in the Shire. The farm offered plenty of sheep for the film to use, but they were not the correct kind of sheep. Some depressed looking black faced sheep were imported in and used as stunt sheep in the film. Also, the trees in New Zealand were not the correct kind of trees from the book. The book called for oak trees. So a tree and leaves were imported. However, the wrong color leaves were ordered, and they had to be spray painted green. We finally made our way to the top which is Bag End, and then down to the bottom to the party area where they celebrate Bilbo’s birthday. We saw one more set of houses; one which belonged to Sam Wise, and then made our way to the Green Dragon Inn. To be honest I didn’t really remember the Green Dragon Inn from the films. During Frodo’s vision, when the Inn burns down, they actually burned down the Inn. So the one I went in was rebuilt for the tour. We were served some authentic Hobbit beer and thus concluded our tour. It was a magnificent day in Hobbiton and I can’t wait to re-watch all of the movies now that I have so much inside information.

Welcome to my blog!

Reno Tahoe local who has a zest for life and adventure. Follow along on my blog and start your own adventure today!