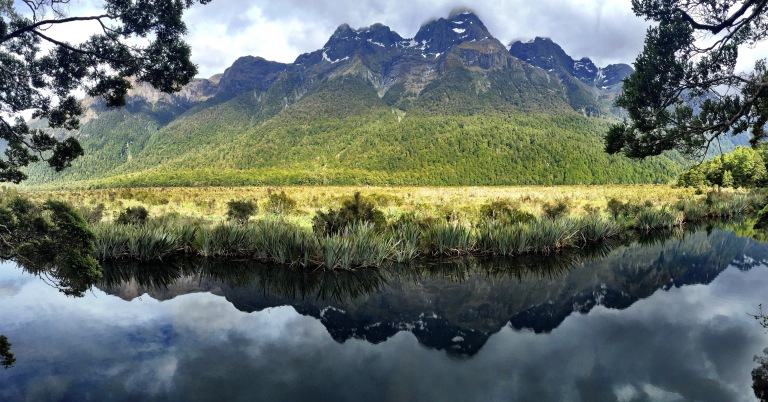 A guide told me that the area of Te Anau gets as much rainfall in one year that the entire country of Australia gets in one year. I understand Australia is a desert, but it is also massive. I experienced quite a bit of rain while I was there. Its comical, I always go from nicer weather to worse. Sun to rain. Rain to Sun. New Zealand has not been as warm as I thought it would be. Today looks promising for sun, but I will still probably wear jeans and a coat all day. I waited out the rain in Te Anau and decided to walk a part of the kepler track. It follows a massive river. I saw a lot of runners on the track. It would of been a nice track to run, except just a wee bit muddy. What I didn’t know was something called the Kepler Challenge was just a few days away. These people were planning to run the entire Kepler, which is 60k. I started to get hungry, so I turned around to head back and make some dinner. The next morning I was heading to Milford Sound bright and early. The road to Milford is an experience all on it own. Apparently it to is one of the most dangerous roads in New Zealand. The guide however, said it is dangerous mostly because of tourists not paying attention and driving on the wrong side of the road. We made many stops on the side of the road to Milford to take in the sights and take some pictures. I loved mirror lakes, where the mountains reflected perfectly. We also made a stop where you had a gorgeous view of a river and the valley gorge in front. Also, we would see Kea along the way. The Kea is an Alpine Parrot, and they are halarious. They jump onto the cars and go for ride when you take off. They also pick the rubber off the car. Very noisey, very comical creature. We arrived at the Milford Sound and loaded onto our boat. It was very windy. I was glad I had all my warm clothes with me, so I could hang out on the top deck for most of the time. The view was again beautiful, like most of NZ. Tons of waterfalls running down the sides of the cliffs in the fiord, we saw dolphins and seals. Everything is so green and lush. The cruise basically takes us the length of the sound out the Tasman Sea and back. Because it was so windy that day the swells on the sea were huge. On our way back there is a waterfall the boat gets us real close to. The skipper warned everyone about standing outside on the second deck because you would get wet. I was on the back part of the 3rd deck so I thought I would get some spray, but nothing major. I got drenched. I tried videoing the experience, but I’m pretty sure you can only see water spots and me commentating. We finished the cruise and made our way back to bus. We made a few more picture stops along the way, but I was exhausted. I had decided I was going to take the water taxi over for a one day hike on the kepler the following day, so I needed to rest up. I woke up early once more to prepare for the hike. I had chosen to hike the same day as the Kepler Challenge. But luckily the runners didn’t bother me to much. I liked seeing the looks on their faces, and they would ask me how much further. I walked up with a Swiss boy I had met on the water taxi. He had a long day ahead of him, and would probably hike 25-30k that day. He also had a tiny bag with him, and was going to be on the kepler for two nights I believe. Three at the most. The walk through the trees was nice, a bit muddy, but again lush green. We then made it to the top and the clearing. We took in the views of Lake Te Anau just before the rain came. We then powered through to the hut for some lunch. At the hut, we met up with an American who was also from our water taxi. After lunch, the Swiss boy wanted to take advantage of the good weather and continued on. Myself and the fellow American decided to check out the Luxmore Caves. They were amazing. I tend to be a bit closterfobic, so crawling through the cave was a feat for me. Luckily my companion had a headlamp because I only had the flashlight on my phone and it was quite dark down there. We traversed through some tight spots and saw some cool features before deciding to come back. There was one point where we reached a fork and thought, which way do we go? We decided to follow the stream because it was familiar, and it was the correct choice. After the cave, the American and I parted ways. I was heading back and he was continuing on. Had I known the difficulty of the walk from Broad Bay to Iris Hut, I would of booked the Kepler a few weeks ago and done the entire track. But I was unsure and decided to play it safe. After my two day walks, I only missed out on a bit of the track. My bus the next morning was leaving quite early, so after getting off the Kepler I called it a night. I was headed to Oamaru to see the penguins bright and early.

Welcome to my blog!

Reno Tahoe local who has a zest for life and adventure. Follow along on my blog and start your own adventure today!

There was an error retrieving images from Instagram. An attempt will be remade in a few minutes.